grayHAUS is a design and construction firm like no other. Based in Brisbane, we specialise in creating one-off luxury residential properties, partnering with our clients from the early design phase right through development, construction and all the finishing touches.

South Brisbane - By Appointment Only 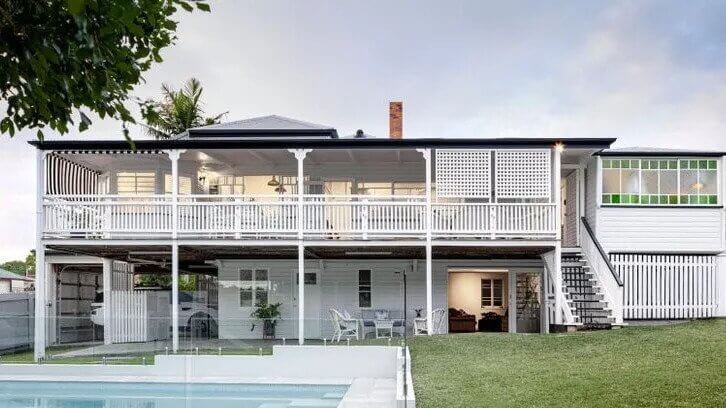 This renovated house at 6 Robinson St, Moorooka has sold under the hammer for $1.15 million. Photo: supplied

The first onsite auction for Ray White New Farm since the COVID-19 lockdown was not supposed to be held at a bus stop – but, when more than 100 people turned up for the auction, agents had no choice but to take it out on the street.

Mr Cush calls the auction from the nearby bus stop.

With only 20 people permitted onsite at any one time for open homes and auctions in Queensland right now – and a large crowd, including nine registered bidders, turning up in the rain – Ray White auctioneer Haesley Cush set up proceedings off the property at a nearby bus stop.

The bus does not pick up any passengers but stops for several seconds at the intersection before turning right into Hamilton Rd, Moorooka.

When the 116 bus from Rocklea pulled into the stop, Mr Cush had his mum’s umbrella in one hand and a whopping $960,000 bid in the other.

“Here comes the competition,” he said, pausing the auction of 6 Robinson St, Moorooka to let the bus pass.

This is what Robinson St, Moorooka usually looks like. Photo: Debra Bela

On Saturday it looked like this. The house going to auction was the white house on the left. Photo: Debra Bela

“He had a little bit more time to think about it,’ Mr Cush said of the bidder. “I’m looking for a million now.”

With people still arriving, real estate agents decided to relocate the auction to the street to adhere to social distancing requirements.

When the hammer finally went down, the five-bedroom renovated Queenslander sold for $1.15m to a couple that had been sheltering under an umbrella emblazoned with the logo of South Australia’s Pulteney Grammar School.

Nine registered bidders were in the crowd with five active during the auction.

They hadn’t crossed the border for the auction, but were once stationed in South Australia.

“I worked as a teacher in South Australia but I’ve been here for eight years,” the successful bidder said. “We live in Camp Hill”.

The 102-year-old Queenslander the couple bought was one of 42 properties that went to auction across Brisbane over the weekend.

The vendors Andrew and Megan Mewing had bought the property in 2014, getting local builders, Grayhaus, to undertake a full renovation.

Nine registered bidders were in the crowd with five active during the auction.

It was Mrs Mewing’s home staging company that set up the property before auction.

Ray White New Farm agent Meaghan Bakker had no doubt that the staging made a difference when it came to attracting buyers’ attention.

“There’s no question it was the presentation of this home,” she said. “It was straight out of the pages of a magazine.”

“The majority of our buyers including the successful (bidder) were people who hadn’t necessarily considered Moorooka before,” she said.

For the auctioneer, Haesley Cush, there was a touch of nostalgia being in the suburb too.

THIS ARTICLE WAS ORIGINALLY POSTED ON – https://www.realestate.com.au/news/100strong-crowd-forces-impromptu-moorooka-bus-stop-auction/